I am trying to be a little more disciplined about the blog ~ hopefully updating it once every week or two. What with having gotten married, getting my PhD, setting up a business, and the arrival of my beautiful son Freddie; things have been a little crazy and are now starting to settle down! I’ve also been taking lots of my own family photographs recently which I will endeavour to post to Flickr some time soon!

I went back to Nancy’s albums today. Every time I look through them I feel like I get more questions than I do answers. The most burning one is if she is still alive. Quite often, when photograph albums end up on eBay, it is because the owner has died and there is no one else who wants them, or they have died intestate perhaps ~ and a house clearance has occurred. Indeed, these particular albums were picked up by the original seller in an auction house so I have a sad feeling that Nancy may have passed away.

However, whilst each viewing of her beautifully kept albums raises questions, they also provide clues about her life. Given that many of her albums connect with her travels in Europe ~ there is a sense that she was certainly had an adventurous spirit ~ especially so soon after World War II.

In fact, it appears that she had a particular affinity with Germany and Austria ~ to the point that in some albums there seems to be evidence of her actually being fluent in Germany and perhaps even working there.

For the album I was looking through today though, a trip to Austria in the summer of 1951 shows her first trip to Europe (from the information I have at least!).

Don’t forget to click on the photographs if you want to enlarge them :0) 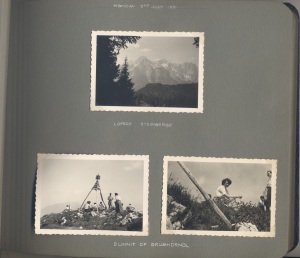 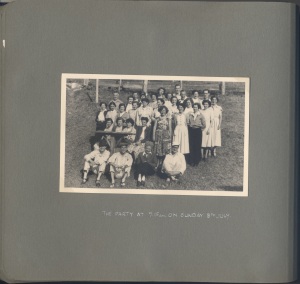 I think I have mentioned elsewhere in the blog, that Nancy did not just keep photographs of her travels in her albums ~ but also other documents too ~ including postcards that were mainly addressed to her parents. 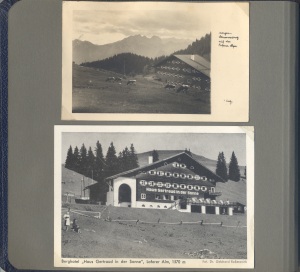 A postcard from Nancy to her parents

From the bits I can make out, the postcard reads:

“Just waiting to have supper – our first big meal. In spite of train leaving Stockton 20 mins late and York 30 ,we arrived on time. I didn’t sleep at all. Plane from Northolt an hour later than schedule. Felt fine until last half hour when it got very hot, but managed to make it.

Had quite a long bus journey at speed, and then a hair raising effort into the mountains in a jeep. This happens every time one wants to go up or down. The train party won’t arrive until 9:30 pm. The jeep ride takes best part of an hour.

Party seems as though it will be predominantly female but we really haven’t got to know people yet. The beds are real German ones – no covers just a big eidendown[?]. the weather has been bad lately so we’re hoping it will pick up  […] Love Nancy”